This blog is intended to give you a flavour of how I work. You can find more information about me by clicking one of the links at the bottom right of this page 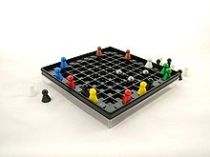 I’ve been clearing out my attic and found an old game called “Black Box”.  In this game, one player places four “atoms” (ball bearings) in a hidden grid and the other player has to deduce where they are.  They do this by shooting light rays (imaginary ones) into the box containing the atoms, and observing where they emerge from the box, after being deflected by the hidden atoms.

Written down like this, the explanation of the game probably doesn’t make a lot of sense, but no matter, because the idea of blogging about this isn’t to teach you how to play “Black Box”, and Wikipedia can do that for you anyway.  What I am observing is that the game seems to simulate behaviours we might observe in others.  Sometimes, when we say or do something, we might get a completely unexpected reaction from someone.  An act of kindness might be met by anger, a moment of sadness might make others laugh, an attempt to be affectionate might make our partner scared.  We shoot rays into the box, but they emerge, after hitting the atoms, in unexpected ways (or sometimes don’t emerge at all).

What is happening in these situations?  Why do people sometimes react in strange and inappropriate ways?  In “Black Box” it all depends on the arrangement of those four atoms that we can’t see.  If we knew where they were, it would all make sense, we would be able to predict how our light ray would be deflected, and where it would emerge from the box.  It is not so different with human beings, but it is much more complicated.

Our reactions are only partly based on what is happening in the here and now.  They are also based on our experience. Certain facial expressions, tones of voice or turns of phrase may remind us of past events or people, and bring out a reaction that is more about the past than it is about the present.  For example, a frown might leave us thinking that we’ve upset the person, when in fact they are just considering what we’ve said, or maybe just have a bit of a headache.

Just as others may react in unexpected ways, so can we, and sometimes these things can spark each other.  So if you see your partner frowning, and assume that they’re annoyed, this may make you upset.  What have you done wrong?  What right have they to be angry with you?  And so maybe you stop talking and lapse into silence – and how might they react to that?  In this way, bad feelings can develop out of nothing, from an unexpected reaction and assumptions about what each other are thinking.

To change this – to stop these things happening, we need to understand ourselves and other people better.  If only we knew where those four atoms were placed in would all make sense!  We can always seek to gain a better understanding of ourselves, and so modify our reactions to those triggers – the frown, the raised voice, the expressions that press our buttons.  We can do this through talking to others – counsellors, friends, relatives – and through reflection.

But we can never understand ourselves completely, and still less can we understand others completely.  Thank goodness!  If we could predict how others would react, I think life would be rather dull.  In “Black Box” there are only four atoms to find, and so a complete understanding is possible – but in real life, our brains have rather more than four atoms in them (in most cases, at any rate).